It was around the fifth inning of last night’s Mariners game when I first caught sight of the action in Houston. I was on a flight from New York City to Detroit that landed around 10:30pm EST, but the descent felt much longer. The first thing I did with my phone out of airplane mode was open my MLB app and put on the RSNW feed. The Mariners were ahead 5-4 with Robbie Ray in his final inning of work. Could I be suffering from travel fatigue? Not this time Lydia. I assured myself it was no jet lag-induced mirage – the M’s were threatening to win a game in Houston.

At that moment, everyone around me was utilizing the taxi time wisely. People packed up belongings, double checked seat pockets, and strategically draped bags over limbs as they prepared to disembark. But I’m a sports fan and suboptimal decision-making is a required prerequisite. The Mariners were in a one run game against the first-place Astros, so I decided to wing it on everything else.

I stuck with my priority hierarchy while walking through Detroit’s (lengthy) A Terminal, while toiling at baggage claim carousel three, ascending escalators to the skybridge, navigating to my ride share, and through thirty or so minutes of an Uber ride home. Thanks to my driver for recognizing a sports fan in the wild and subsequently respecting the need for silence.

By the time I reached my front door, we were in the throes of a signature Midwest thunderstorm. Mother Nature played all the hits: lighting, thunder, and torrential downpour. Little did I know, the weather was scoring a befitting soundtrack to the Mariners game.

A mere thirty seconds after I crossed the threshold – just enough time for me to punch in an alarm code and remove soaking wet shoes – Ty France was hit by a pitch by Houston reliever Héctor Neris. Despite the unusual location (right below the numbers in the meat of Ty’s back), it initially appeared innocuous enough.

Mariners fans are uncomfortably familiar with the sight of France being hit by pitches. He led all of MLB last season with 27 HBP, and he currently holds the 2022 crown with 12. But the plunking history goes back even further, through his time in the minors, and even his college days at San Diego State. As Ty explained in an MLB article last year, it’s his version of walking. Albeit one with more bruises.

Being used to something and liking it or two very different things though.

When I saw France get hit by Neris’s pitch with two outs in the top of the ninth, I was concerned and disappointed, but I can’t say I was shocked. I’d seen it happen too many times. And there didn’t appear to be any ill will or intent.

LITTLE DID I KNOW, THE THUNDERSTORM HAD MOVED TO MINUTE MAID PARK.

After a few brief words between France and the home plate umpire, tempers escalated, and benches cleared.

I watched this all play out from the floor of my entryway, afraid that if I made a move to change out of wet clothes or adjust my seating, I’d miss a second of the ensuing chaos. Turns out I was right. I’ve never been so proud of muddying up my hardwoods. Two ejections later, things got really juicy. Thanks to Julio Rodríguez doing Julio things.

J-Rod’s two-run, two-out jack gave the Mariners a 7-4 lead. It also gifted us one of my favorite screengrabs of the season.

Mariners Twitter is truly the greatest place to be in these moments. Thanks to our friend @DanJonCon for taking the time to catch this moment on the Houston broadcast.

“Julio Rodríguez… he did some damage against the Astros in Seattle but hadn’t hit a home run since that series against the Astros…” Props to the Houston broadcaster for crafting the most non-complimentary compliment he could muster.

The fact that you can hear Aaron Goldsmith’s excitement through a wall, on an opposing broadcast tells you everything you need to know.

Now, hopefully none of last night’s shenanigans spill over into today’s match-up, so we can have some good, clean baseball fun. After Julio’s home run, Neris sailed a 94-mph fastball near Eugenio Suárez’s head, leading to his ejection, and that of Astros manager Dusty Baker.

Whether you believe Neris was guilty of following the “unwritten rules” or not, let’s all agree the antiquated laws of retaliation are silly and barbaric. Pitchers throw too hard for that nonsense. Plus, for all my scorekeepers making diligent game notes, this is WAY too much information to try to cram in a small box or margin.

Despite the sideshow, last night’s win felt like pure joy.

Houston fans on Twitter tried very hard to steal our happiness afterwards, but um hello, we are fans of Seattle baseball. You can’t hurt us. Remember Westley from The Princess Bride? Remember how he built up a tolerance to a deadly iocaine powder by slowly ingesting it over time? That’s Seattle fans with baseball heartbreak, okay? Your poison has no power here. We are immune.

Can’t wait to do it all over again today.

This time maybe from the comfort of a couch or a chair. No offense to the Detroit airplane terminal, baggage claim area, or my wood floors.

Burning sage bests Nickelback in the search for good vibes 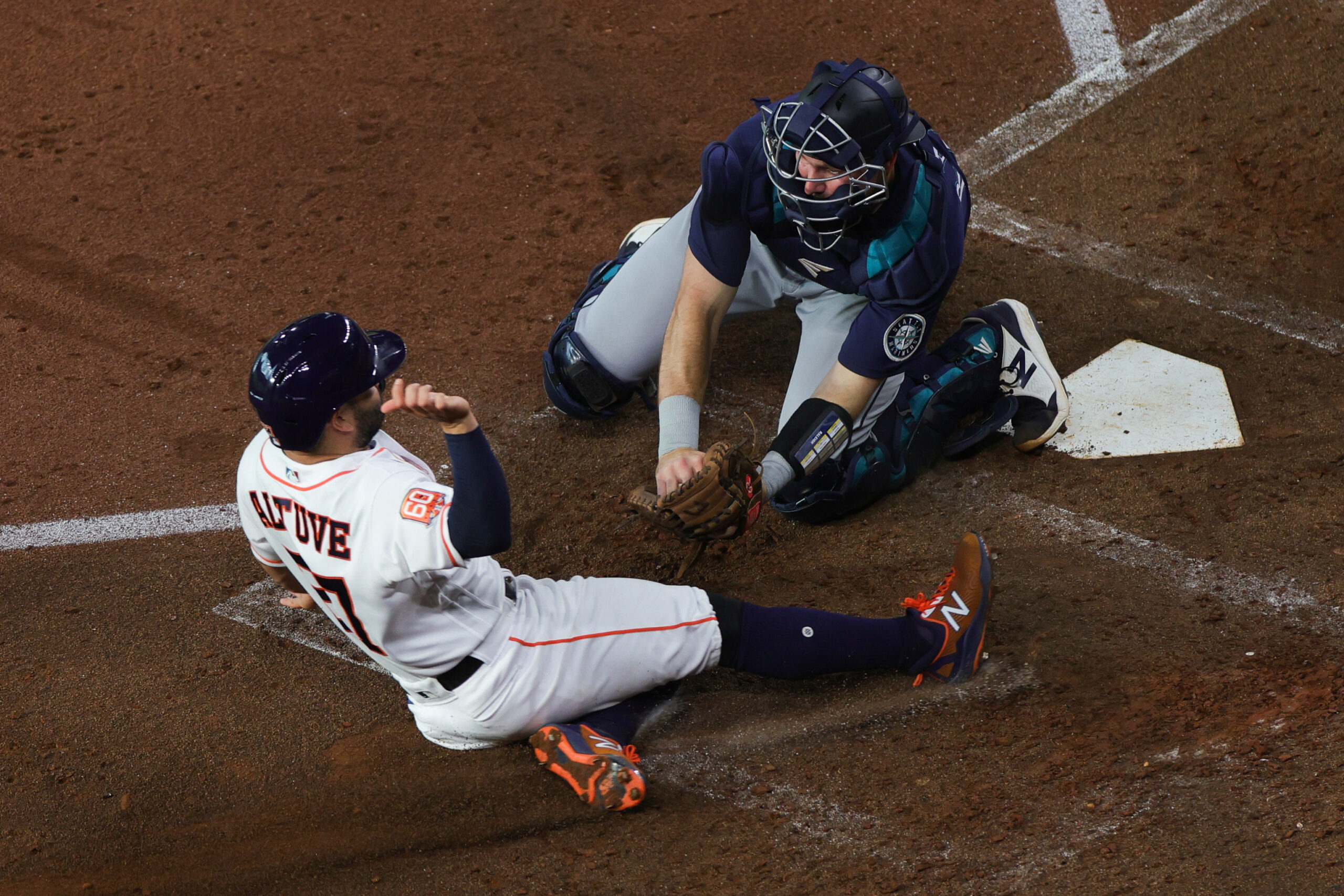