It’s May 16 and the Mariners emotional rollercoaster is already open and running extended hours. The ride’s tagline could be, “Excitement, nausea, nausea from excitement – we’ve got it all.” There was Seattle’s 7-2 homestand that kicked off with an 11-1 trouncing of the Astros and hit like an early coaster apex. In those moments I am typically stupefied with rapture and think, “Who would ever voluntarily disembark this thing?” Shortly after, Seattle dropped 10 out of eleven games in a dutiful attempt to provide me with an answer. The M’s were also shut out five times (three at the will of Houston) leading to their -8 run differential.

Logically, I know there’s no such thing as a highs-only rollercoaster. That’s just an elevated tram. Disneyland sold the PeopleMover as a ride for 28 years, but eventually people realized it was less of an attraction and more a form of transportation. Like amusement park junkies, sports fans aren’t on the hunt for the practicality of conveyance. We want exhilaration. What other reason would there be to board a season/life-long behemoth that sells euphoria and misery as a package deal?

Despite the M’s aforementioned season lows, they ended the weekend on a wildly fun note. Seattle absconded with a series win from the NL East-leading Mets, becoming the first team to do so. Marco Gonzales out-dueled Max Scherzer in Friday night’s 2-1 rain-delayed victory. On Sunday, the M’s tallied 16 hits and held a comfortable 8-5 lead going into the bottom of the 9th, but still did their best to make it a nail biter. New York shrank the gap with two runs off four consecutive hits. With the bases loaded and two outs, Diego Castillo struck out Pete Alonso on a check swing in front of 38,476 disgusted Mets fans to seal the win.

While fans can’t depend on rollercoasters for exclusively favorable feelings, we can look to specific players for more consistent servings of joy. In 2022, guys like Ty France, JP Crawford, and Logan Gilbert are heaping felicity on our plates. But Julio Rodríguez deserves a special category. The 21-year-old outfielder recorded the first four-hit game of his career on Sunday, which included his second home run of the season.

Don’t you dare assign him a limited toolbox though. Julio loves to show off his speed by turning singles into hustle doubles and stealing bases (10). He also leads the Mariners in OAA in the field. Julio does all of the above with a trademark smile. It is impossible not to love this cherub, or at least I never want to meet the contrarian who believes it’s possible.

J-Rod’s early successes are impressive when measured against other highly touted prospects. Of MLB’s Top 10 Prospects for 2022, three are currently playing in the majors:

Although several more are expected to be seen soon.

The Mariners were able to catch a glimpse of Witt Jr. and his legendary hair when they played the Royals earlier this season. He went 4-13 in the three-game series, though none of those hits were for extra bases and his sOPS+ (OPS for split relative to League’s Split OPS) was 77. Witt Jr. and Rodríguez have tallied roughly the same amount of AB this season, so how do their 2022 totals compare?

RBI, R, and HR are remarkably similar for both players, but there’s a noticeable hike in Julio’s stats in other areas. His 0.7 WAR is fourth best on the Mariners and third best among Seattle hitters.

Spencer Torkleson’s MLB start has been slightly rockier. His time in the Arizona Fall League was cut short last October when he sustained a right ankle sprain. Torkelson spent the offseason recovering before earning a spot on Detroit’s Opening Day roster.

Torkelson takes more walks and chases significantly less than both Witt Jr. and Rodríguez, but so far consistent contact has eluded him.

This might sound like an admonishment of two of the most promising young players in baseball, but I assure you it’s not. Witt Jr. and Torkelson are experiencing very predictable growing pains. By normalizing their struggles, I’m simply taking a moment to appreciate Julio’s remarkable powers of transition. He’s excelled through every difficulty jump of his career.

Julio is one of my favorite Marvel comic book heroes come to life, Armando Muñoz, AKA Darwin. The former X-Men affiliate has the ridiculously rad power of reactive evolution. Throw him into any environment, and his body will adapt to survive. Continuous circumstantial evolution. That sounds eerily similar to J-Rod. Give him a new mountain to climb and he’ll find a way to summit that peak. Again and again, he proves it.

It’s hard to identify a point in Julio’s minor league career where he even struggled. His least impressive numbers (which are still impressive) are from the 67 games he played in Class A West Virginia in 2019, when he hit .293/.359/.490 with the Power. It was the only time in his minor’s career when his OPS dipped below .900 (.849). It’s also remarkable because J-Rod missed two months that season from mid-April to mid-June after breaking a bone in his left hand. He worked back from injury, then rebounded from a sluggish July to have an outstanding August. So much so that he earned himself a promotion to (at the time High-A) Modesto.

In Julio’s first game with the Nuts on August 16, he tallied four hits, including a home run. At that point his peers were averaging 4.5 years on him, and according to the M’s, he was only one of three 18-year-old’s to play in High-A over the course of 2019. He topped that year off with an invite the Arizona Fall League, where again, most peers were four years his senior. Rodríguez hit .289/.397/.365 in 15 games before a minor back strain forced a shut down.

2020 was a lost season for minor league players and truncated season in the majors. The ripple effect on player development was far-reaching, as Keith Law explained in a piece for The Athletic earlier this year. It’s difficult for anyone to make the leap to MLB under ideal circumstances, so lost playing time, interrupted progression plans, and fluctuating workloads certainly didn’t help. That’s what makes Julio’s evolution unique and quite spectacular.

J-Rod appeared undisturbed by the down time, as he made a seamless transition from High-A Everett to Double-A Arkansas in 2021. His numbers somehow got more impressive when he moved to the Texas League. Julio hit .362/.461/.546 in 46 games with the Travs. Between Everett and Arkansas, he knocked 13 home runs, increased his walk rate, and swiped 21 bags.

To be fair, J-Rod’s first month in the bigs wasn’t all warm and fuzzies. The strikeouts were plentiful, although often aided by “creative home plate umpiring.” Instant success is not expected though – growth and progression are. Keeping an eye on Julio’s splits is fun because he’s doing his usual continual improvement thing.

In a time when offense is historically low and dead ball theories continue to circulate, it’s understandable why several young prospects are off to a slow start.

It also makes Julio Rodríguez’s recent success all the more impressive. I’m not ruling out superhuman powers of circumstantial evolution.

If you don’t already have J-Rod gear, now might be a good time to start building your collection. Luckily, we can help you out with that.

The Art of Scorekeeping

Solid pitching and quiet offense is an iconic but undesired duo 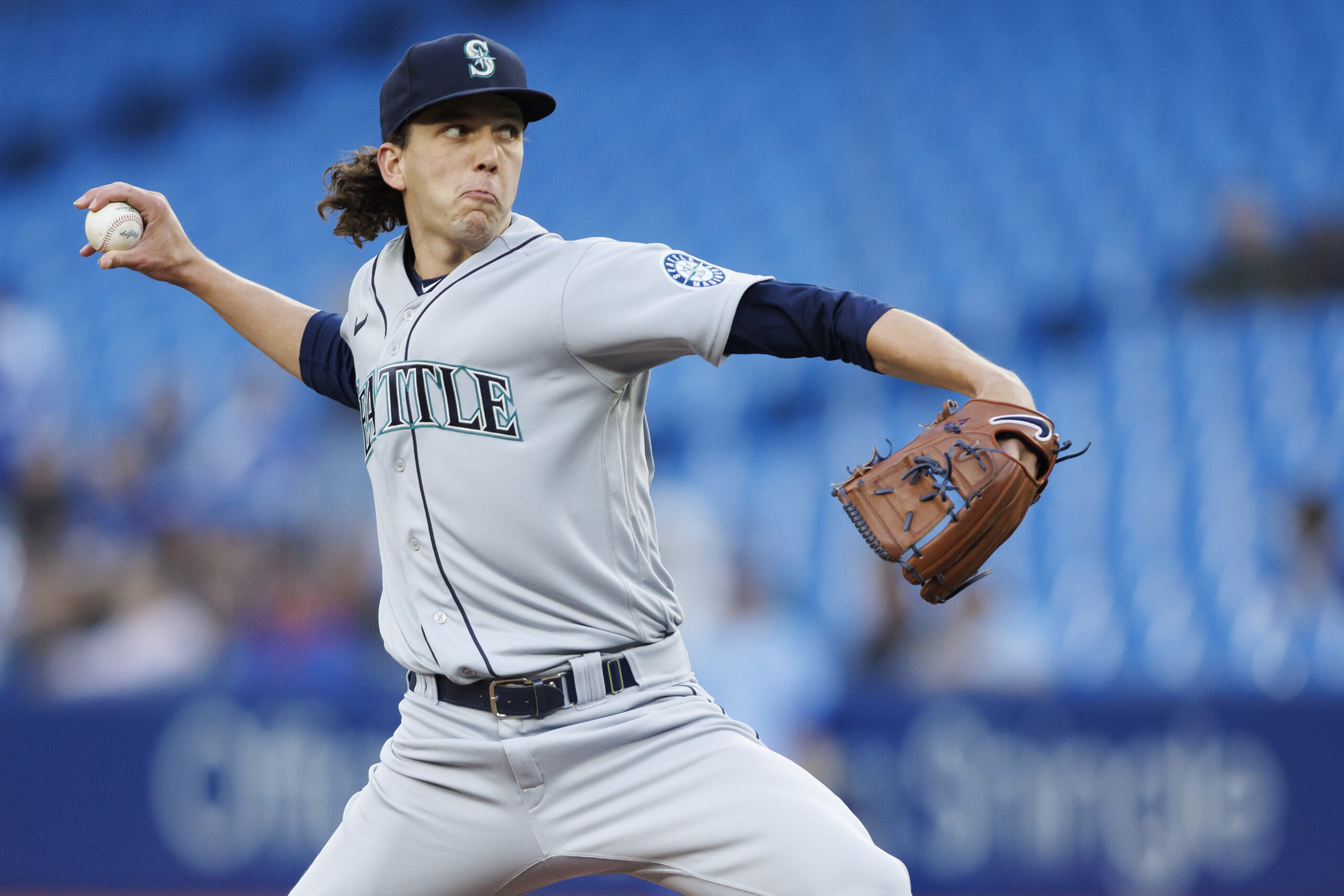