Every year there are a cascade of things to love about your favorite baseball team, and some of them allude detection by Baseball Savant or Statcast. After all, there’s no advanced metric to evaluate Jesse Winker’s love of fanny packs or adequately express the greatness of The Beef Boys Club, founded by Cal Raleigh. That’s why I’m here to help friends. Think of me as a fun curator or a rabid collector of 2022 Mariners excitement. Over the next few weeks, we’ll explore reasons to love this Seattle roster, one endearing player at a time. Sometimes that will involve wRC+ or Hard Hit%, but other times it might revolve around a guy’s unapologetic love of fishing (Adam Frazier) or the Deftones (Tom Murphy) or naming his dogs after Marvel heroes (JP Crawford).

To kick things off on this fine Friday, we’re taking a moment to appreciate a player whose ocular plate concentration has inspired sonnets. Well at least multiple people have been awed by it online. I’m talking about switch-hitting, trilingual, 3B/DH/OF Abraham Toro.

A few quick notes on the information I included and why. You can expect to see every player’s middle name, because I’m me and I love middle names. I just do. Also included: every player’s full name in capital letters because that’s the excited Twitter voice I use after they do something heroic, and I like to use happy visuals. There’s also player nicknames, 2022 walk-up songs (although I’m still missing some), and my thoughts on why you should allow yourself to become emotionally invested in the particular individual.

Some come on, let’s open up our hearts together. Let’s court the potential pains of attachment and risk disappointment. Allow yourself to fall in love with this Mariners team so we can experience every high (and low) of the 2022 season together.

All together in caps: ABRAHAM JOSUE TORO

Nickname: According to Baseball Reference he has none, but I’d like to submit “AbraSlam” for consideration, if it so pleases the court. First, it sounds cool. Second, it’s a fitting tribute to one of the most memorable moments of the Mariners 2021 season.

Early last August, fresh off the trade from Houston, Toro was just settling into his Mariners tenure.

It felt like a good time to submit a lofty proposal to the universe.

A few weeks later, that evolved into a long-odds ambition during the Mariners game on August 31.

The M’s were hosting the Astros and despite a formidable Houston offense, both teams remained scoreless into the eighth. On the mound for the opposition was Kendall Graveman, a Mariner until a mere month prior, when he was traded to the Astros alongside Rafael Montero. Houston put veteran reliever Joe Smith and Toro on a plane to Seattle in exchange for the pair of bullpen arms. Following the trade, many feelings were expressed. A plethora of op ed pieces were penned and controversy ensued. Each modicum of discourse pulled a Jenga piece from an increasingly shaky skyscraper until finally, in a Scorsese-like effort of dramatic achievement, we reached this particular apex moment in late August.

Graveman entered in the penultimate frame and gave up a leadoff walk to JP Crawford. He caught Mitch Haniger looking, but promptly surrendered a single to Kyle Seager. Then on 0-1, Graveman tagged HBP magnet Ty France to load the bases and bring Toro to the plate. I swear there was a John Williams score playing, because Mariners fans felt every cinematic detail of this moment. Here were the two hotly debated trade pieces from a month ago, gearing up for a high-leverage showdown. Each one facing their former team. The precarious Jenga had officially reached all limits of structural integrity.

Now I’m not typically a lucky draw kind of girl. The last time I remember winning a raffle prize was my third grade cake walk, and I’m fairly confident everyone left with dessert thanks to a cake surplus. So as a rule, I try to steer clear of sweepstakes or investing in specific improbable outcomes. Then again, I’m a sports fan. Our hearts aren’t ruled by reason or logic. And so as Toro strolled to the plate with bases loaded, the irrational believer in me was once again prompted to submit this request to the universe.

Eight pitches later, the baseball gods smiled on Mariners fans everywhere, and gave us this moment.

I still get chills watching it. Aaron Goldsmith’s call is legendary. You can see Graveman kick his leg in frustration, knowing he missed his spot. That’s followed by Toro’s thousand-watt smile as he crosses home plate and his teammates going crazy for him.

That’s my long-winded way of humbly submitting the “AbraSlam” nickname to Baseball Reference. It’s also a tribute to one of my favorite moments in 2021, made possible by Abraham Toro. The ability to show up in big moments is certainly one to treasure.

2022 Walk-Up Song: Undoubtably something cool, but one I missed at the ballpark last weekend. If any of you geniuses made a mental note, let me know.

More Things to Love: Toro is fluent in three languages and bats from both sides of the plate… need I say more? The 25-year-old is both French Canadian and Venezuelan, and he hails from Longueuil in the Canadian province of Quebec. There he spoke Spanish and French as a youngster, before becoming fluent in English by age 15. MEANWHILE, I AM WRITING THIS IN MY SWEATPANTS NOT AT ALL FEELING LIKE A SLACKER. There’s a great article in The Athletic from a few years ago on Toro’s journey to the Majors that you should check out if you have time.

Toro’s versatility extends beyond his language skills, and into the batter’s box, where his keen eye and low Whiff% (88% percentile in 2022) can create difficult at-bats for both left and right-handed pitchers. His BA was higher from the right side of the plate in 2021, but his power came from the left – ten of eleven home runs came as a LHB vs RHP. If Toro’s bat heats up, it will be difficult for the M’s to justify his absence from the lineup, which is why you could see him moonlighting anywhere from 3B to OF to DH. If positional flexibility doesn’t thrill you the way it does Jerry Dipoto, there are other things to appreciate. Like the way his eyes light up when he sees a pitch.

You just know he sees past all the superficial stitching, straight into a ball’s soul.

Those all-seeing eyes also helped Toro deliver in high leverage moments in 2021, when he slashed .292/.418/.417 with RISP and his OPS rose in 2-out situations. His exit velos might not create fodder for your Mariners group thread, but Toro can still create hard contact from both sides of the plate. Couple that with his judicious swing decisions and his humble yet stylish bat flips and you have a Mariners player to love / aimer / querer.

Things to Love About the 2022 Mariners: Adam Frazier 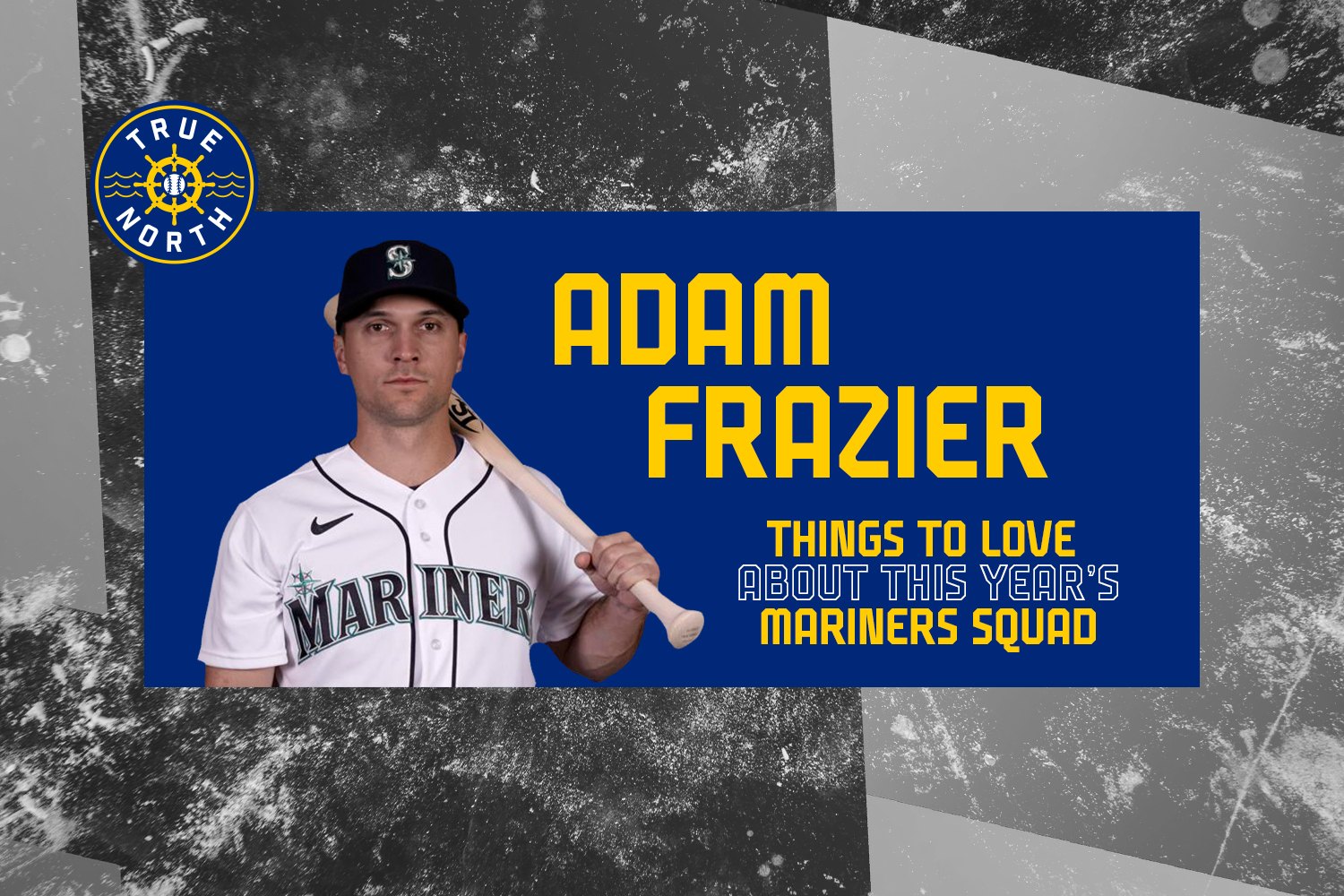