Monday mornings after a Mariners win are always brighter. Coffee is more aromatic, traffic appears lighter, I have a bit of extra buoyancy to my step as I attack the day. The bounce becomes more exaggerated when the wins are the result of extra-innings, comeback, walk-off victory efforts. And when the injection of optimism is sorely needed.

Seattle has been trudging through a slump recently, including a six-game losing streak and the state of Florida waging a personal campaign against the Mariners. The Sunshine State stole a page from the fictional town of Bomont, but instead of making dancing illegal, they outlawed visiting offensive production. Where is Kevin Bacon when you need him?

It looked like the M’s might break out of their funk last Friday with a trademark late-inning, come-from-behind victory. Jarred Kelenic stepped to the plate as a pinch hitter in the bottom of the 8th inning and swatted a two-run bomb to give Seattle a 6-5 lead.

But just as chaos ball giveth, chaos ball taketh away. The M’s slump slumped further. That is until George Kirby, Abraham Toro, and Ty France helped change the tune on Mother’s Day. Kirby’s MLB debut was phenomenal (6 IP, 4 H, 0 R, 7 K), and his cheering section was unrivaled. Toro hit a game-tying HR in the bottom of the 9th to force extra-innings. In the bottom of the 10th, Kelenic started on second base and advanced to third on a sac bunt by Dylan Moore. Tampa Bay intentionally walked Adam Frazier in hopes of setting up a double play. A fair plan in theory, but when Ty “My OPS is 1.300 with RISP” France is strolling to the plate, be prepared to light your plan on fire and watch as he roasts marshmallows over it.

That’s exactly what happened on Sunday, when Ty hit a walk-off single and made s’mores for all to see. Afterwards, he was mobbed by his teammates. Geno’s reaction was my favorite. He embraced France and wouldn’t let go for a good ten seconds. It personified fan sentiment. Thank you for giving us this moment. Thank you for putting a moratorium on sadness, at least for a day.

The great thing about Ty France is those big moments aren’t aberrations, they’re ubiquitous. He’s given Seattle fans plenty of reasons to celebrate since his arrival in 2020. That’s why on this bright and sprightly Monday morning, our Things to Love About the 2022 Mariners series gravitates to #23. Aside from his ability to roast the opposition’s plans into dessert, what else is there to love about the M’s first baseman?

All together in Caps: TYLER LAWRENCE FRANCE

Nickname: Officially, no. But “Air France”, “Vive la France”, and “the French Renaissance” are all recognized in Seattle.

Things to Love: Where to start, where to start… It would probably be wise of me to begin with Ty’s remarkable 2022 figures or his Statcast profile, or any number of impressive numbers. But instead I’m starting with Oakley France, Ty’s golden retriever and VERY GOOD DOG. Tonight is the M’s first “Bark in the Park” night at the ballpark after all, and there is no such thing as too much dog content. I first caught a glimpse of Oakley back in 2021 thanks to the M’s virtual Fan Fest, and a timely screenshot by our friends at Lookout Landing.

When I’m interrupted during a virtual meeting, it’s usually because my neighbor has decided to blare music in the middle of the day. I’m understandably envious when other people are “interrupted” by adorableness on four legs. What was our zoom call even about? I forget. This is exclusively a dog meeting now.

Mariners Fan Fest 2021 solidified me as an Oakley France fan. And then we got even more amazing content this spring training.

I know, it’s hard to concentrate with all that sunshine blinding your eyes, but we’ll power through.

Now that we’ve covered canine companionship, we can spend time on more traditional reasons to love Ty France, beginning with those aforementioned numbers.

Let’s start with his slash line, which currently sits at .319/.385/.474. Aside from his penchant for getting hit by pitches (he led MLB in 2021 with 27), France doesn’t take a ton of walks. He has 9 walks in 131 plate appearances in 2022, which is good for somewhere in the mid-thirties of MLB percentile rankings. Ty finds other ways to get on base. He currently shares the AL hits lead with 37. Only Manny Machado (42) has more in all of baseball. You also won’t see France doing the strikeout walk of shame back to the dugout very often. While he can be prone to chase pitches, he doesn’t usually miss. His whiff rate is in the 90th percentile.

Looking at pitch location for France’s hits this season, it’s clear he is a fan of the middle third, but he’s created hits in nearly every area of the zone, even outside of it. That creates a challenge for scouting reports.

How about pitch type? Well, there’s no glaring weak spots there either. France has positive run value on four-seamers, sliders, sinkers and curveballs. His BA is above .300 on all four offerings. He’s already at +9 run value this season, powered in large part by taking swings in the heart attack zone.

Add all those things up, and it’s like you’ve Weird Science’d a formidable hitter. Except you didn’t have to piece together a dream player John Hughes-style, he simply exists. He’s Ty France and he’s on your team.

Scott Servais wants the Mariners to be, “uncomfortable to play against.” Well France fits that bill. Opposition discomfort is very important to him. The Mariners offense has battled anemia at times this season and losing Mitch Haniger in their lineup exacerbates production concerns. On April 29, Haniger suffered a Grade 2 high ankle sprain in his first at-bat after returning from the COVID-19 IL, and according to Scott Servais, his return timetable remains unknown. The importance of France’s steady production in the two-spot can thus, not be understated. I am here to state it appropriately.

I’d be remiss if I wrapped up this article without talking about the sheer brilliance of Ty’s name and the cavalcade of puns and phrases it’s inspired. There’s so much fun to be had with Ty alone.

And a plethora of France references.

At one point last year, it made me throw this thought into the universe.

Not understanding that the power of Ty France was so great, people might actually listen.

One minute you’re just having some pun with your friends on Twitter. Yes, pun. The next thing you know, you’re sitting at T-Mobile Park with someone in a full Marie Antoinette costume and another person dressed as a box of French fries. There’s a sea of berets in the crowd, you’re waving (and taking bites out of) a baguette, and you’re on your feet with the entire South of France section every time your namesake strolls to the plate.

Like I said, Ty France has given us a ton of reasons to celebrate – a few of them more absurd than others. The point of this exercise is to embrace the absurdity along with reason, so we attach ourselves to human beings, not simple stat lines or box scores.

I’ll leave you with one final reason to love Ty France. And that’s his ability to chat up anyone and everyone at first base. Evidenced last year in his mic’d up appearance below. Ty is like a professional front-door greeter, always ready with a compliment or a quip for those traveling through. Skip to 3:23 to hear France make his case to Perry Hill to let him steal.

Things to Love About the 2022 Mariners: Adam Frazier

How to Feel Good When Your Team isn’t Good 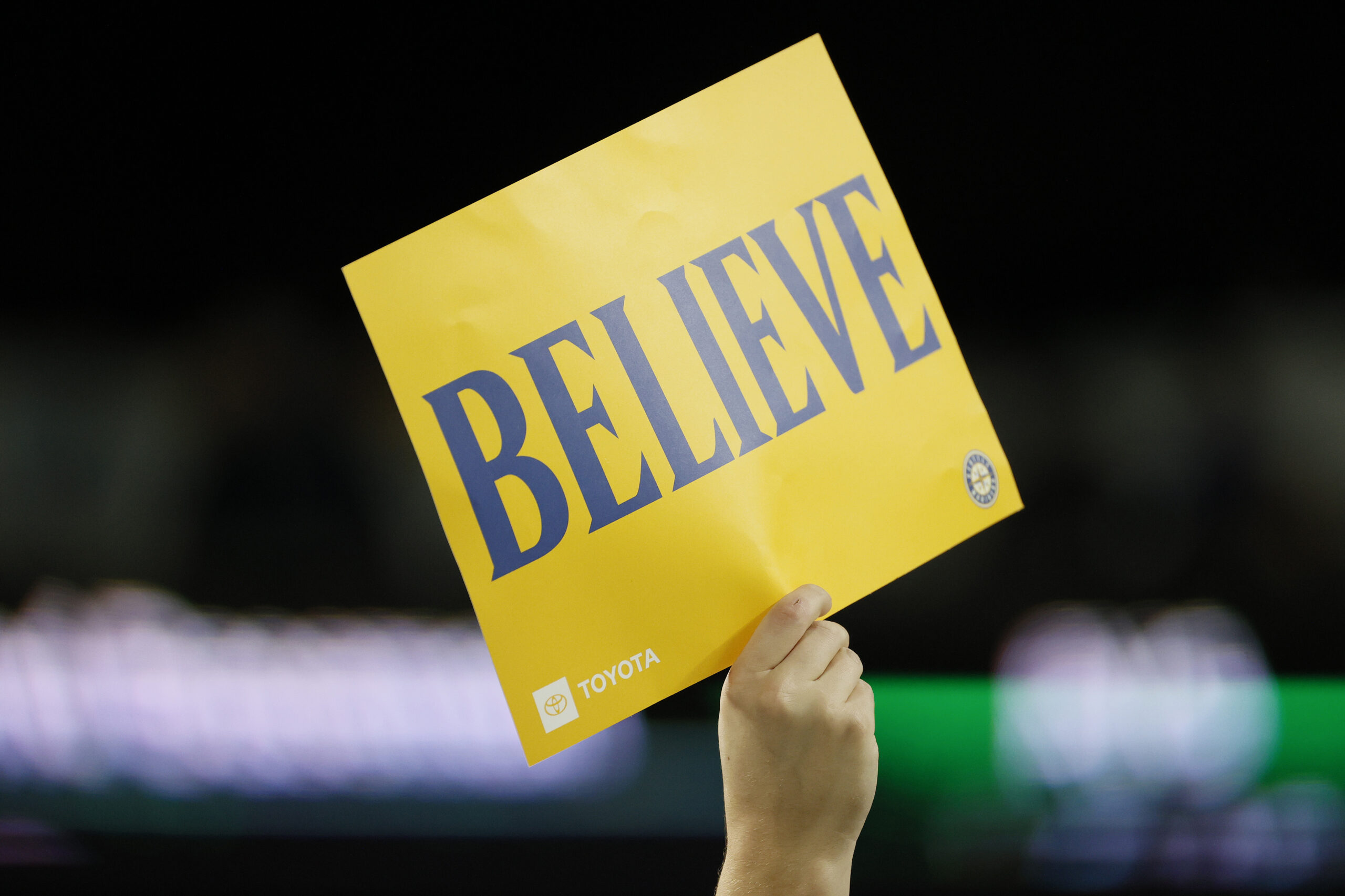